EA stakeholders are all the people who have any kind of concern with regards to an organizations EA [11b]. These concerns need to be addressed by models provided trough EAM.

A definition for the term EA stakeholder is provided in TOGAF Version 9.1 developed by the Open Group. According to the framework an EA stakeholder is [11b]: “An individual, team, or organization (or classes thereof) with interests in, or concerns relative to, the outcome of the architecture. Different stakeholders with different roles will have different concerns”. This means, that stakeholders are people who deal with the creation, evolution, operation or removal of elements of the EA [BBL12]. A great number of stakeholders can be identified in literature and practice [Nie07]. Unfortunately, differentiating terms for the same roles and vague or overlapping role descriptions make it impossible to provide a full list of all possible stakeholders [Nie07]. Nevertheless, for better understanding a non-exhaustive list is provided in Figure 1.

The interest of these stakeholders is expressed as concerns [11a]. These concerns cover interest in the system itself as well as interest in the environment influenced by the system, including developmental, technological, business, operational, organizational, political, economic, legal, regulatory, ecological and social influences [11a]. As illustrated in Figure 1, the association of concerns with stakeholders is many-to-many [11a]. 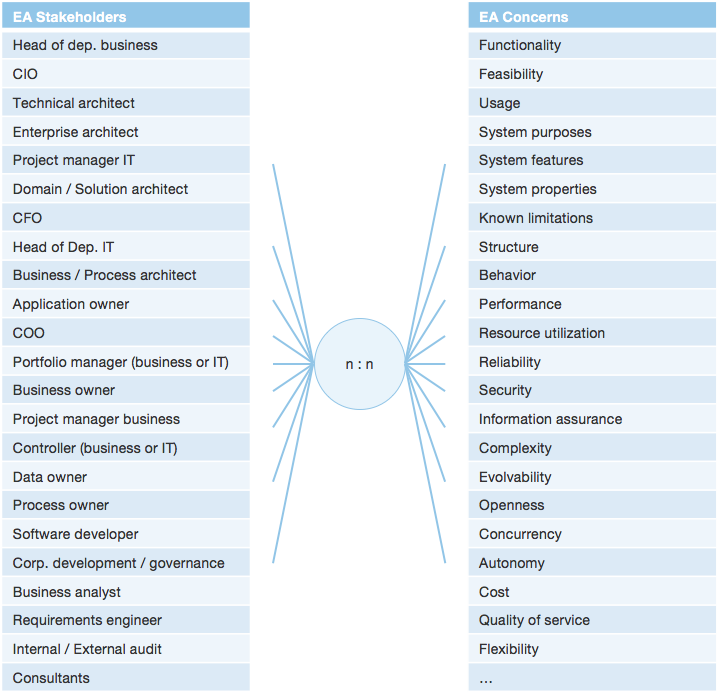 An architecture model should identify the stakeholders of an EA and address their fundamental concerns [11a]. By using viewpoints to frame one or more concerns, a separate treatment of concerns is enabled allowing the stakeholders to focus on the topics relevant for themselves [11a]. This fosters management support, stakeholder buy-in and proactive stakeholder engagement which is of high importance for the success of an EAM endeavor [RZM14].

Links for this topic (8)